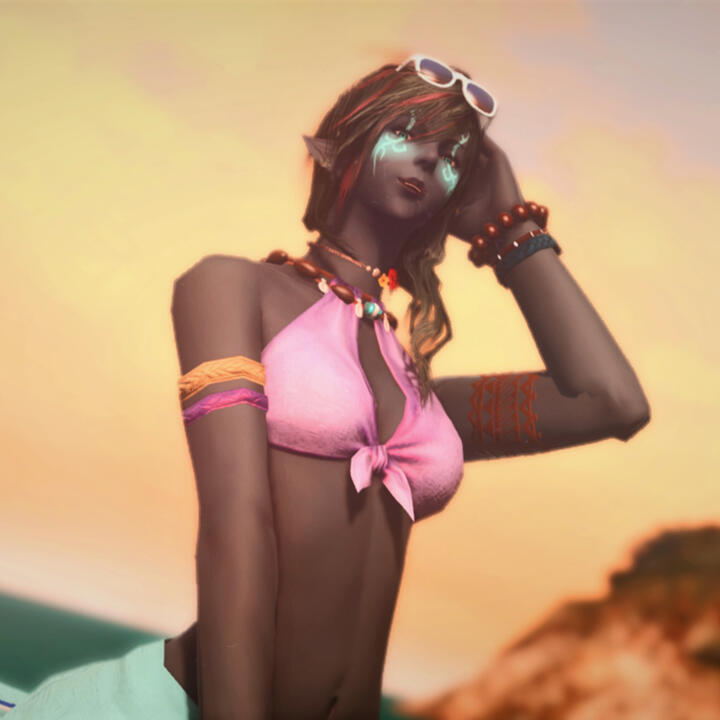 Blue-skinned, feminine Duskwight. Looks to be in roughly her late twenties, though with Elezen longevity, she could easily be older.
Usually keeps a slight, whimsical smile on her face, though a sadness hides in her eyes.
Frequently wears hats, sunglasses, or sports an umbrella when in the sun.
May be carrying an instrument on her back. Often a guitar.
Wears a simple, silver-like wedding ring on her left hand, but gives no indication of being married.
Frequently has Jack-o-lantern earrings on.
Wears a lot of cheap accessories like anklets, wristlets, and plastic sunglasses.

OOC
- This carrd is still WIP
- I miss posts in crowded areas. (Tell!)
- If I'm AFK, whisper me. Unless I disconnect, I always check my whispers when I get back from being AFK.
- I play Bard using a midi keyboard. I'm still learning, so I'm limited in what I can play.
- I'm an adult over 30.
- Some Duskwight lore is a little vague, so Wixie's early history is mostly my best-guess/preferred-interpretation of things, subject to change if new lore is added.
- I actually do have another character, but I don't do RP with them, I just do content on them.
- I don't really speak French, though I can understand a little of it. :(
- If you have further questions, just ask!

History (Spoilers for Stormblood)
Wixie, like most Duskwights, grew up in a poverty that was, from their point of view, forced upon them by their neighbors in Gridania. After her both her parents were killed in an Imperial incursion, she and her two older brothers fell in with the bandits of the Redbelly Hive in the South Shroud.
On a trip accompanying her brothers to Buscarron's, Wixie happened to witness a traveling minstrel's performance, inspiring a lifelong passion for music within her.
At the age of nineteen, still not quite fully grown by Elezen standards, both of Wixie's older brothers were "murdered" by Wood Wailers. Alone, and not willing to stay on with the bandits without her older brothers to protect her, she set off on her own, heading south towards Ul'dah.
With naive dreams to become a famous musician, Wixie was wholly unprepared for the cut-throat city, and she nearly ended up in slavery, were it not for the intervention of a group of Ala Mhigan refugees who took pity on the young Duskwight.
Finding common ground over having both been displaced by the Empire and rejected by Gridania, Wixie made fast friends with a young woman close to her age named Nadissa, and she followed the Highlander's family when they moved to Little Ala Mhigo. Eventually, Wixie and Nadissa married, and when Nadissa wished to join the Ala Mhigan resistance, Wixie dutifully followed, acting in a support role as a conjuror.
Eventually, however, Nadissa would incur wounds too deep for Wixie's healing, and the young Duskwight would watch as her wife died in her arms.
Distraught, she wandered aimlessly, taking odd jobs as a musician, courtesan, dancer, or whatever else, eventually traveling to Limsa Lominsa.
Leading up to the Calamity, Wixie changed her name and joined an all-Duskwight punkrock band The Wistemonts, with harsh political messages decrying the Garlean Empire and Gridania. After half the members died in the Calamity, however, and the remaining disbanded.
Around this time, Wixie moved to Thavnair, working as an "exotic" dancer and courtesan in Radz-at-Han for a couple years before returning to Eorzea.
After the Bridge at Velodyna was taken from the Empire, Wixie returned to Ala Mhigo, seeking work and hoping to do her part in seeing the nation's freedom restored. It was there she met with a Vira Ananta named Sharissa who remembered Wixie from her time in the resistance, and before she changed her name. Despite being a so-called "beastman", the Ananta and the Duskwight found common ground over the fact that both their people were generally met with suspicion by Eorzeans, and a somewhat taboo romance quickly bloomed, spurred by the euphoria brought on when the Empire was driven out of Gyr Abania. Ultimately, however, cultural differences and differing life goals caught up with the two, and they broke off the relationship with complicated feelings of love, frustration, and bitterness towards one another.
Today, Wixie lives in her company's basement in Shirogane, frequently traveling and finding freelance entertainment work where she can. She is moreorless the same free spirit today, albeit a bit older, a bit sadder, a bit wiser, and with a little more hope in her heart than yesteryear.

Details
Languages: Wixie learned both Common and Elezen at a young age, but primarily spoke Elezen until she set out on her own. Lack of practice caused her to initially struggle with Common, but she adapted over time. She is generally good at learning spoken languages but struggles with reading.
Accent: When she was younger, she had a strong Elezen accent, but it's largely diluted now, though still noticeable. She's been known to place an added emphasis on it at times.
Aether: Wixie is mildly gifted in healing and has a fairly strong reservoir of Aether, but as she does not "worship" the elements, she must draw upon her own Aether to use, often leaving her tired since she is largely untrained beyond the basics.
Sensory: As a Duskwight, Wixie has exceptional hearing as well as darksight. For the most part, her senses are otherwise average, but she can find sunlight somewhat blinding, resulting in near-sighted vision even with the aid of sunglasses.
Physical: Expectedly slender build, but a bit on the shorter side for an Elezen, she moves with a dancer's grace.
Weaknesses & Immunities: Wixie is not immune to any poisons but has a minor resistance to all elemental spells.

18+
Gender: Female
Orientation: Pansexual
Wix's IC Preferences: Wix prefers feminine and androgynous partners, but mostly just finds excess masculinity a turn-off. She finds lithe individuals (such as other Elezen) especially attractive, but she is wary of Gridanians.
As much as she dislikes Gridanians, Wixie understands that they are not all bad. This open-mindedness does not extend to Imperials, however.
OOC notes:
I do ERP, but that doesn't guarantee I will.
You're not required to approach OOC, but I do expect you to be willing to talk OOC. Experience has taught me that a partner who avoids OOC communication is a red flag.
In all likelihood, I probably won't ERP with you on the same day we meet. But if you REALLY want that, it's 400,000 gil an hour to hire me - assuming I'm not busy.
No minors IC or OOC. No Lalafell.
See Services for more.
I generally ERP in party chat.
If I'm feeling up to it (and I may not be), I may be willing to type up a quick post of Wixie seducing your character as sample.

Notes
Know this my children. There is more ugliness than beauty in this world.
To live is to suffer. To drink of calamity and drown in anguish. To toil and be tested, always and ever.
'Tis a perilous path you walk. Death lurks in the dark, and is the sole promise that awaits at journey's end.
You will tremble with terror. You will weep tears of anger and despair.
...but do not avert your eyes. See your life for what it is.
Then you will see how the hardships make you strong. Every doubt reforged as scales for your armor. Every agony to temper your blade.

Preferences:
- One on one, or small groups.
- RPing in whispers or party chat.
- Lore abiding.
- Down to earth characters.
- Staying away from big name NPCs.
- Fast typing with shorter messages preferred, but flexible. My short attention span loves fast responses though.

Yes, there's a NSFW gallery. I am currently not sharing it here.

Wixie's History
Wixie, like most Duskwights, grew up in a poverty that, from their point of view, was forced upon them by their neighbors in Gridania. After her father was killed in an Imperial incursion, her remaining family fell in with the Redbelly Hive bandits of the South Shroud.
At the age of nineteen, still not quite fully grown by Elezen standards, she set off on her own, heading south towards Ul'dah. With naive dreams to become a famous musician, Wixie was wholly unprepared for the cut-throat city, and she nearly ended up in slavery, were it not for the intervention of a same-age Ala Mhigan refugee who took pity on the young Duskwight. Becoming fast friends, the two women would marry a couple years later. Wixie would go on to join the Ala Mhigan resistance as a healer, until her wife was killed in a skirmish with the Empire.
Distrought, she wandered aimlessly, taking odd jobs as a musician, courtesan, dancer, or whatever else, traveling as far as Thavnair to Limsa Lominsa.
Leading up to the Calamity, Wixie joined an all-Duskwight punkrock band, with harsh political messages decrying the Garlean Empire and Gridania. After half the members died in the Calamity, however, the remaining disbanded.
Today, Wixie lives moreorless the same, drifting and finding entertainment work where she can. Albeit a bit wiser, less bitter, and with a little more hope in her heart than yesteryear.

Services:
Roleplay Training/Help:
If you want to try RP or ERP, but are afraid to, or feel you are rusty, I'd be happy to help get you started and do a session with you. This was originally something I was doing for a while with friends (and even strangers) for free, but I now do it as a service.
I realize that anxiety and self-doubt is a big issue holding a lot of people back, so I strive to be patient and understanding. All I ask is that you respect me, respect my time, and do your best.Prices for teaching SFW RP are pretty flexible (arguably tip based), as this is mostly me trying to help people. If you just have questions, I'll may even answer them for free (as best I can, if I'm not busy).

Courtesan:
Yes, I ERP for gil. I have years and years of MMO ERP experience.
We can jump right into it if you want (necessary if I'm working at a venue), but there are slower options as well (see Escort Service). I specialize in the Affectionate Girlfriend Experience, and am generally a gentle dom or an obedient sub. I'm open to most things that aren't the typical "gross" stuff or involve a lot of pain (mild pain is fine).
Do you RP as a large race that gets shoehorned into playing a dom but you want to be a sub? Or maybe the reverse - a small (non-Lalafell) race that wants to be a dom for a change? Consider hiring me!For ERP: 400,000 gil per hour (or 200,000 gil for 30 minutes).
I'm fairly generous with timing, and I will try to talk certain things through before starting the clock. However, I do require payment up front.Escort Service:
If you'd like to hire Wixie as your escort for the evening, hit me up OOC and we'll work together to arrange a time that works for both of us. I'll also send you an IC questionnaire to fill out, to help you get immersed and so we can both get a better feel for your character. This includes optional ERP, but it is not necessary.The pricing for Escort Services sort of depends on a number of case-by-case factors, so I can't accurately list it.If you want to hire me for something not listed here, just message me and ask!

Though I participate in the practice, I have complicated opinions on how the predominance of involving gil in roleplay can hurt the quality of roleplay in the community. While the practice exists in all MMOs to some extent, it is far more prominent in FF14 than any other MMO I've tried roleplay in. I don't think FF14 players realize just how peculiar FF14 is in this regard.